Starting a new venture is a huge decision in itself because all your investment might go in vain with one wrong move you make. This can even be the choice of the app development company that you opt for developing your application. This application will be the only source of revenue as well as returns on investment for your business. So, making this crucial decision requires thorough research and analysis of the market.

So, if you're somebody who's starting a new venture and haven't been able to find a good mobile app development company for your startup, this list below might help you out. Choosing one will be a tricky process because you need somebody who reflects your brand's ideology and caters to the creativity requirement as well. With detailed backend research, we have listed the top 10 mobile application development companies for startups who have a significant amount of experience in the industry and might be a great fit to deliver a suitable solution for your startup. 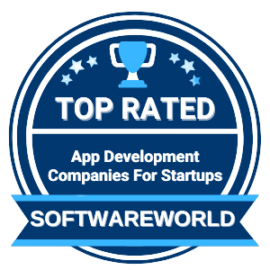 Do you have a concept in mind for an application? With Folio3, you will be one step ahead to take that idea to the market for all the success you've wished for. Folio3 works on ideas from their clients and turns them into applications that provide value to their customers in the long run as well. Since Folio3 started out as a startup itself, this company knows how it can be a struggle for startups to maintain a healthy balance between budget and quality development. This is why they claim to do the development work for you in less than a year's college tuition fees. If you wish to go through some of Folio3's work, their portfolio with multiple applications about multiple industries like Apex- an e-commerce website, Ruffle Butts- A children’s clothing e-commerce store, Stock Photo Pro- a stock image gallery, GoEcoLife- another eCommerce store and much more. Evidently, Folio3 has expertise in e-commerce applications. But, it is undoubtedly one of the best app development as well as software development companies for startups.

Whenever a startup is unsure about how to begin developing software or application, or don't have a specific development team for that yet, MojoTech might be the best option to join hands with. MojoTech isn't one of the typical mobile app development companies for startups who take a fortune to develop a quality application. It instead works according to a two-week development policy. In these two weeks, MojoTech's team will take care of the development speed, maintainability, and quality while balancing it all well together. Under Armour- one of the best works of MojoTech is a scalable order management portal that's helping hundreds and thousands of industries worldwide. Shell, another one of MojoTech's work, is an IoT platform that gets workers, data, and tools at one platform for better productivity. The list of some great projects completed by MojoTech is never-ending that makes it easier for you to understand their strengths.

Fueled, ever since they've started doing mobile app development for startups have proved to be the best startups could ever get. They don't just claim to be the best but actually have proof to support this claim. One of their apps was awarded for being the best app of the year from Apple, and all their applications to date have processed transactions worth above $10 billion. Verizon, Google, Warby Parker, Compass, and many other startups believed in Fueled, and now they rule their respective industries while most of them also made it to the Fortune 500 companies list. Check out their previous work like MGM, QuizUp, Verizon, and many more that will give you an idea about how they work and what they work upon.

With IT Craft- a startup app development company, you can see results from the application they develop in a sprint which will also save you weeks that other software development companies generally invest while developing an application. This can all be possible with IT Craft's Startup Booster Toolkit. They've been in this application development business for startups for more than 20 years now, and have successfully developed applications for more than 2000 companies. Their technical expert team has about 280 professionals who take an average of 3-5 months to develop an application. For you- a startup, IT Craft is focused on MVP development, Full-cycle development, Technology migration, project rescue, product pivot, team augmentation for a successful application developed in the end. IT Craft will basically make your dream company idea come to reality while also helping to keep that idea running for a long time.

Arkenea, who's been awarded the best for app development for startups many times has helped its clients build multiple iOS and Android applications that have generated about $10 million revenue over the entire time. For example, Arkenea helped ORLink develop a surgical workflow iPad application that generated $1 million revenue on its launch itself. Another great example is Canvsly, an application that was featured on the Apple store many times and was also featured in some of the top publications in the world. Arkenea can also help you build an e-commerce application like Viva that provides a streamlined bar service instantly to its users. One of the many reasons to choose Arkenea is that they're healthcare domain experts with about ten years of experience in this industry and that they've also been called the best software development company in many industry research reports.

Pixelfield is an app design and development company for startups based in London. The best asset that Pixelfield carries with themselves is their experience and that too, with some of the big companies in multiple industries. These names include WMC GREY, Mercedes Benz, Raiffeisen Bank, Veolia, and Geometry as well. The reason that Pixelfield is so successful is that their team doesn't work as an agency but an in-house department only. They won't just take your notes about the idea and deliver you the results in the end. Instead, they'll discuss every little detail with you at every single step of the development process. They become your CTO, your creative partner, and your development team for the entire time that you're working with them. They'll be with you for everything starting from Micro branding, presentations, prototype, designing, development, and even the analytics part in the end.

WOXAPP is a startup mobile app development company that delivers a solution to your vague idea by converting it into a feasible application. Since WOXAPP already carries an experience of establishing 50 startups with successful applications, they will carry the same to develop an application for you. WOXAPP understands the market of Central Asia pretty well and can provide you with the best method to sell your goods or services in this market. The main advantage you have while working with them is transparency during the entire development process. From TA-DA to ZealStep, WOXAPP has worked on varied types of applications, bringing them all to success. While TA-DA was an application meant for android users, ZealStep was meant to be used by iPhone users which explains WOXAPP's ability to design apps for both iPhone and Android platforms. You can always use their project cost calculator to analyze the approximate costs for your project with them.

Halcyon Technologies is one of the best app developers for startups to build consumer-centric, self-service, and content-driven applications that are well analyzed to suit the targeted market. These applications by Halcyon will help your brand stand out of the growing competition and improve consumer engagement with better service. They have a portfolio of about 60 applications that are running well in their respective industries which include both small applications and industry-grade apps. The main industries that Halcyon caters are healthcare, travel, logistics, automotive, utilities, and retail. Applications like RumbleOn, DixiePower, TravelPack, Peak-Ryzex, and FlyBaby will prove their expertise in all the above-mentioned industries. Some of the most successful applications that Halcyon developed for their clients are Redbumper, 700Credit, and MBU. All the three are entirely different from each other developed specifically according to the startup's requirements.

Seamgen is the only startup mobile app development company that claims to have a mobile application development DNA in their blood. From 2008, when they first set foot in the mobile app development industry to the present date, Seamgen has been developing iOS and Android applications for startups that wish to drive brand engagement through an application. Seamgen understands San Diego's market too well and hence works for startups based there with a mission to develop applications that are intuitive as well user-centric. Such applications drive ROI for the startups while also providing a delight to their users. One such application is Mivo- the smart feeder that tracks a baby's consumption for his/her parents. This application was a huge success in San Diego and is still used by millions of users. For those who wanted a brief about San Diego's zoos and parks, Seamgen developed an application called San Diego, which is again a huge success in San Diego's travel market. Consider these two as their best works and make an informed decision.

OCDLab helps startups convert that great yet unplanned and underdeveloped mobile application idea into a successful business in the long run. They just don't code, but build a foundation of your business with that application. They won't just blindly agree to everything you say but will work as an in-house team that actually cares about your application's success. OCDLab has made it to the Fortune 100, and hence knows what they need to invest in an application to reach that position again. Having worked with some great names like HP, YAMAHA, THREATSTREAM, Jacuzzi, and many more, OCDLab now has the experience of working towards large goals and achieving them as well. Use their ten years of experience and build an application that's not just successful but impactful among people.

We hope we've ended your hours of googling and gave you some good options to consider. These companies will build a balance between your budget and designing requirements to deliver an application that caters to all your requirements. Consider their past work, clients they've worked with, and especially the reviews that the previous companies who worked with them have left to make a decision you won't regret in the future.